Open Letter to the People Who Leave Their Pets for Dead 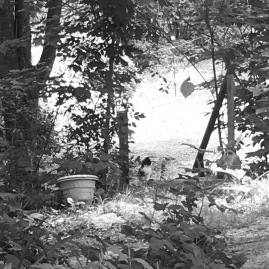 I never thought I would write one of these “Open Letters” but I need to say something, and I need it to reach as many people as possible.

We live about 9 kilometres from Gatineau in the woods, a nice, quick, picturesque little car ride will get you to our house… without fail every year people do just that, but it’s not to enjoy the scenery, it’s to abandon their so called beloved pets. With the reasoning that they will “return the the wild”.

Mittens and Fido think they have a loving family, then boom, next second they are cold and alone in a wilderness that is as alien to them as the surface of Mars would be to us. They have no idea how to survive. Their only saving grace? People like myself, who invest our time and money to catch them and bring them to the SPCA or find homes amongst our friends and family, so they at least have a fighting chance.

The saddest part is, by the time I find them, they are disease ridden and half feral. With next to no chance of making it to adoption. If you had just owned up to the fact that you no longer wanted them, or could no longer take care of them and brought them to the SPCA in the first place they would have easily been adopted. Yes you have to pay, but for God’s sake, grow up! Pay the fucking fee, instead of turning a blind eye and leaving the pet you once cared and where responsible for to live a very short sufferance of an existence.

Last years I saved a family of 4 cats, an adult female and male, and their 2 kittens. They likely didn’t make it because they where already very sick and feral.

This year, I have already found a 3 week old kitten, and another kitten with her mother that we have yet to catch. So tonight I have to go back to the fucking SPCA, pay the 50$ to rent a trap and hope that I manage to catch the mom and kitten before they move on, or die. Then I have to transport a half feral cat in the back of my car, and if you have ever had to do that, then you know how fucking nerve racking it is to have a cat yowling, growling and trying to break out of the cage in the backseat while you drive!!!

Listen up people! Those cats and dogs you dump here do not adapt and turn back into wolves and cougars, so stop fooling yourselves. Most of the time they die. Period. End of story. And the nice farmers that maybe you have convinced yourself will take them in? They are barely getting by as it is, without having another mouth to feed!

If you are not prepared to make the hard choices, and pay the money, then you are NOT ready to own a pet. And frankly you don’t deserve one.

Tell me what you think? Cancel reply

This site uses Akismet to reduce spam. Learn how your comment data is processed.